Perhaps it’s wanderlust. Or maybe some kind of zugunruhe. But it’s that time of year when I’m about to ditch the comforts of modern living and head for the field. I don’t just mean a week or two, but several months. And what better place to go than the most remote inhabited place on the planet – Tristan da Cunha.

The village of Edinburgh of the Seven Seas, the settlement on Tristan da Cunha

Sitting about 2800 km WSW from Cape Town, South Africa, this 12 km-diameter island is home to about 270 Tristanians. Aside from the main island, my work will take me to Gough Island, Nightingale Island, and hopefully Inaccessible Island (which, despite the name, is, in fact, accessible, but only during the confluence of good weather, good seas, and luck).

Last year was my first journey to the South Atlantic, and it was eye-opening. Aside from the fantastic (and novel) biodiversity, the visible impact of humanity was also in plain sight. Whether this was the mice on Gough that eat albatross chicks alive, or the deafening silence of the main island, it’s clear that though remote, Tristan is far from pristine.

So on Wednesday I begin the long journey for what I’ve dubbed on Twitter #TdCadventure. But not before another small adventure – the annual crew change at Gough Island.+

Along with the University of Cape Town, the RSPB runs an annual monitoring program on Gough that measures population size, breeding success, survival, and the effects of mice on a myriad of species. This year marks the 61st expedition to Gough, and so is dubbed Gough 61. Our team of 3 scientists will join the 5 staff of the South African weather station on the island for a 13 month posting. in September, we’ll relieve the Gough 60 expedition, and transition to Gough 61. It’s a hectic time, as we only have about 18 days on the island, and need to transfer skills, knowledge, and methods to the new team. Lots of long 18+-hour days, but also some amazing scenery, great company, much laughter, and for the last number of years, great success.

Tristan Albatross chick. This species is endemic to Gough and is greatly affected by introduced mice.

Then, when the S.A. Agulhas II departs Gough, it will deposit me back on Tristan for another 2 months where we’ll hopefully accomplish our delayed survey of the endemic Atlantic Yellow-nosed Albatross, and deploy autonomous acoustic recorders to get a handle on what nocturnal burrow-nesting species are on the main island. 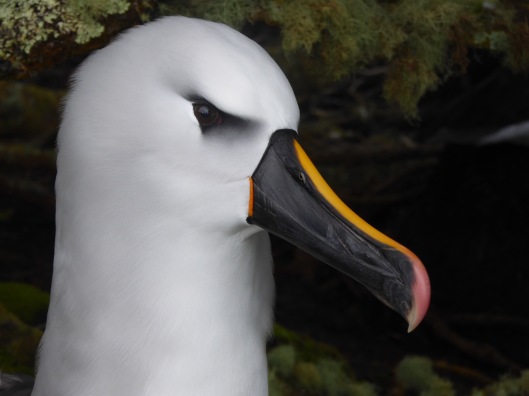 Adult Atlantic Yellow-nosed Albatross. They are endemic to the Tristan group, and the largest population is on the main island.

The internet is fairly poor, so don’t expect much, but I’ll try to put up a few blog posts. You can read about last year’s adventures here: Prologue, Part 1, Part 2, Part 3, Part 4, Part 5.