When I taught ornithology labs, we usually included a free-form answer on the lab exam asking students for their favourite bird(s). Students would usually write “snowy owl” or “Blackburnian Warbler” – actual species – but invariably, and despite not being covered in the course (as they were outside the local collection of avifauna), we would get tits, boobies, and shags. And the prof and I would chuckle, point it out to the other, and move on.

The history of common English names for birds is rife with double (or even single) entendre, and the sort of names that make non-ornithologists question whether we’ve really completely lost it.

The first thing to understand is that common English names were given to species by, well, the English, mostly. It’s therefore not surprising that the same names crop up in a wide array of species, many of them unrelated (e.g., the American Robin, European Robin, and North Island Robin). And it was quite common to see a bird in a foreign land, and think that it looked like a cross between two different species/groups. Such was the case with the tit-babblers.

The Old-world Babblers (family Timaliidae) are a group of passerines (perching birds) found in Eurasia (and not to be confused with the Australo-Papuan babblers found in Australia, which are unrelated and in the family Pomatostomidae. See what I mean?). For the sake of simplicity (and minimizing repetitive strain), I’ll just call them babblers. This group has the somewhat annoying feature of being a taxonomic dumping ground. Not sure where to put a new species? Babbler! Something no quite fit in with another family? Babbler! Thankfully, we’re getting most of this sorted now (though the family may not even be monophyletic (Sigh. There’s always something, isn’t there?)). The term was first used for this group of birds in 1832/3 by William Swainson in his wonderfully-titled tome “Zoological Illustrations, or original figures and descriptions of new, rare, or interesting Animals, selected chiefly from the classes of Ornithology, Entomology, and Conchology, &c” (which you can read here). Sadly, Swainson doesn’t give any explanation as to why he chose the name. Perhaps because the birds tend to be quite vocal, babbling along?

Tits, of course (hey – stop that) are part of the family Paridae, which includes chickadees in North America, and the well-known garden tits of Europe. But it was, ultimately, Alfred Newton who first used “tit-babbler” in his 1890s A Dictionary of Birds (read it here), though the name may have existed previously. Likely, the birds were babblers that reminded someone of the tits they knew from back home in Europe. And thus the tit-babblers (Macronus spp.) were born.

All of the tit-babblers (snicker) are, thankfully, in one genus, Macronus, likely referring to their large-ish size compared to other babblers (from the Greek macro for large), and coined by William Jardine and Prideaux Selby in their 1835 Illustrations of Ornithology (read it here). Jardine & Selby also first described Macronus ptilosus, the Fluffy-backed Tit-babbler, in the same volume. The species epithet, ptilosus, likely comes from the Greek ptilon for feather or wing and refers to the fluffy feathers on the aptly-named bird. 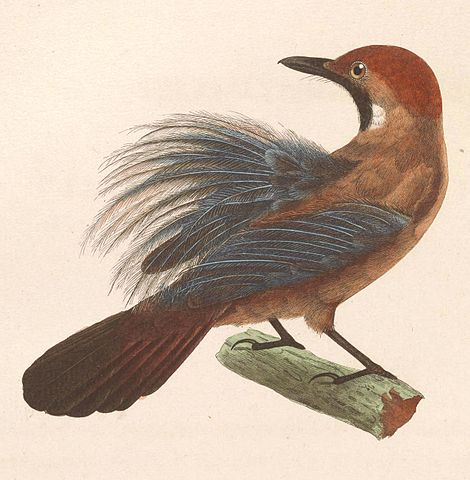 The Fluffy-backed Tit-babbler is classified by the IUCN as Near Threatened, owing to the loss of lowland forests in its native range (Thailand, Malaysia, Indonesia and Brunei).

It is also an excellent Shakespearean-esque insult (though calling someone a lowland forest bird from SE Asia isn’t that insulting).

If there’s there a common English (or even scientific) bird name you’d like explained, leave it in the comments!