I’m a fan of what’s popularly called “natural history” ­– observations and remarks on the fundamentals of a species, community, or ecosystem.  And though it has recently been given short shrift, I think there’s a growing awareness of the importance of natural history in today’s ultra-quantitative ecology and conservation biology.

As much as I can, I devote Friday afternoons to natural history projects – what I call Natural History Fridays.  It’s been a lot of fun, and I can now announce the first result:

In the summer and fall of 2012, Donald was my field tech for work on Gull Island, Witless Bay, Newfoundland.  Part of our regular routine was checking up on gull nests to see which ones hatched and when.  On one particular stretch of the island, we noticed a bunch of broken, empty eggshells from Common Murres (there are about 10,000 pairs nesting on Gull Island).  The eggs had been snatched by Herring and Great Black-backed Gulls, who enjoy eating them.

Sitting in the cabin one night, Donald asked me how thick the eggshells were.  I didn’t know off-hand, but decided to check the Common Murre species account in the Birds of North America series (which covers just about everything known about the 700+ breeding birds in North America).  The only information we could find for Common Murre’s eggshell thickness was a) old, and b) from the Pacific.

Murres (both Common, and Thick-billed, Uria lomvia) are known to have really thick shells, so I was a little surprised when we couldn’t find anything.  In the 1960s and 1970s, organic pesticides, like DDT, caused shell thinning in a variety of birds, including Common Murres in Washington and Oregon.  But no data from Newfoundland (where murres have been studied for more than 60 years!).

During our last week on the island, we picked up a pile of eggshells and brought them back to the lab.  Over the fall, Donald measured their thickness at three places: the top (or pointed end), around the equator (in 4 places around the largest diameter), and at the bottom (the rounder end).  Russian research from the 1950s showed that Thick-billed Murres’ eggs differed in their thickness throughout the egg, likely as an adaptation for rolling around on rock edges.

Lo and behold – they were the thickest anyone had ever measured.  And I mean stupidly thick.  Up to 1.04 mm.  And like Thick-billed Murres, the eggshells of Common Murres showed the same gradient: thicker at the pointed end, thinner at the rounded end.

It was then that I realized that back in 2006 during my MSc, I had collected a bunch of Common Murre eggs from an island in New Brunswick.  One phone call, and one Purolator shipment later, we had the shells from these birds, too, and they were just as thick.  Worried that perhaps the gulls in Newfoundland were selecting eggs from younger more inexperienced breeders (which tend to have thinner eggshells), we went back to Witless Bay in 2013 and picked up some eggs from well-established breeders.  They were thicker still!

In fact, the three groups of Common Murre eggshells we measured (Witless Bay in 2012 and 2013, New Brunswick in 2006) were thicker than anything ever measured before for this species. 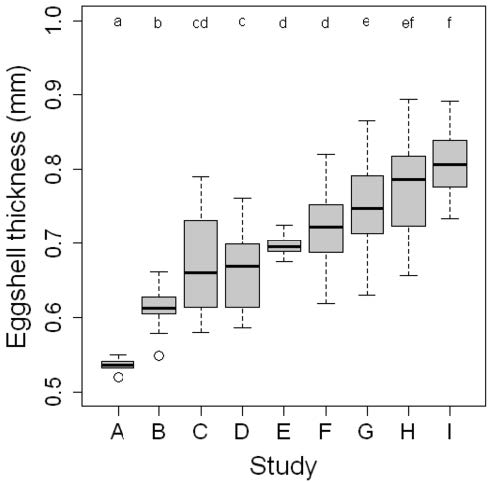 But what do thick eggshells mean?  Murres are fairly unique among seabirds in that they don’t have a nest.  They lay eggs on the cold granitic cliffs of their breeding colonies (some of which are 300m high!).  They are also packed in like, well, murres on a cliff, so the probability of an egg being jostled is essentially 100%.  Their shape (sort of a rounded pyramid) means they can roll on the nesting ledge without falling off, and the thickness means they won’t break when bumped.  But until today, we didn’t really know how thick they were. 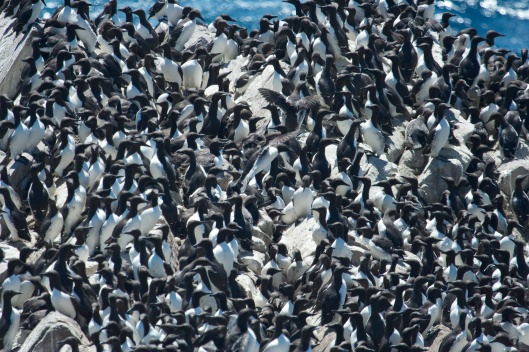 Field camps are wonderful places for observations, and observation is the fundamental unit of ecology.  And there are still journals, like the Canadian Field-Naturalist, that see the importance of these natural history contributions.  And someone can come back in 5, 10, 50, 100 years to see what effects (if any) anthropogenic and/or natural changes in the environment have had on these wonderful critters.