Recently, Sarah Boon wrote about her search for silence on Vancouver Island, which reminded me of some of the reasons I enjoy island work so much.  Islands have a cultural allure – cut-off from the mainland, isolated, occasionally uninhabited – and for the majority, they are “elsewhere”.  Immersing ourselves in the natural world is becoming challenging. There are simply more people with greater means of “getting away”.

When living in Newfoundland, a friend remarked that she used to love camping, but that it had fallen out of favour recently. Surprised, I asked why. “You’ve got to go farther and farther into the woods to really get away” she replied. The incursion of the partying, 4×4-driving, fashion-“field clothes”-wearing demographic was simply too great.  This is not to set up a sense of conflict between True Outdoors-folk™ and those who take less pleasure in discussing cross-gate-loading of carabiners, but highlights that the make-up of those in the backwoods is shifting. It’s fantastic that more people are going out to see nature (if that is indeed their goal).

But islands are still the domain of the explorers, the adventurers, the discoverers. They are steeped both in history and in the unknown.

One of my formative island experiences came in 2004 while working at Cape Enrage, New Brunswick, on the shores of Chignecto Bay.  Further up the bay was Grindstone Island, which is now managed by the Nature Trust of New Brunswick. For the previous two years, two friends and I discussed kayaking there from the mainland.  It would be a tough paddle, and had to be timed with the tides.  This was the days before Google Maps (at least it was for me), so we relied on survey charts and published tide tables.  One August afternoon, at about 3pm, we launched from Mary’s Point, and were on the island a little over an hour later. 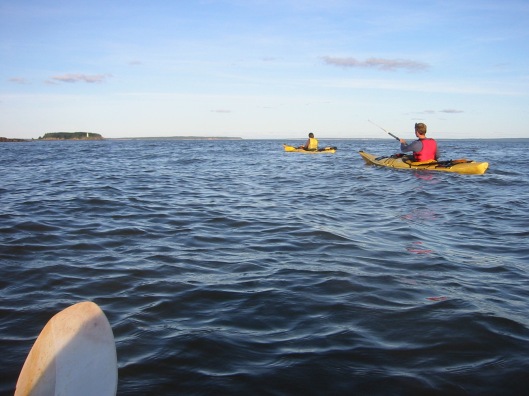 The one landing beach on Grindstone Island

Grindstone was home to a lighthouse from the 1850s, but was decommissioned in 1985.  During our visit, the lighthouse and keepers’ houses were in a state of disrepair.

But why did three of us spend two years dreaming of subjecting ourselves to a very difficult paddle to go see falling apart buildings? Because we knew no one else who had kayaked there, and because it was there.

With the seeds sewn, I quickly became an “island junky”.  Two years on Machias Seal Island in the lower Bay of Fundy while I did my MSc, and then a move to Newfoundland (a larger island, but an island nevertheless).  But nothing could prepare me for the challenges, the hardships, the memories, and the love I found on Kiska.

Sitting far out in the western Aleutian Islands of Alaska, Kiska is an island with a fascinating past. Occupied for thousands of years by Aleut communities, it was largely abandoned by the early 1800s.  The outbreak of World War II saw an American weather station established in 1941, and it was one of two American islands occupied by Japan (the other being Attu, to the west) from 1942-1943.  Today, Kiska is part of the Alaska Maritime National Wildlife Refuge, and his home to millions of auklets (small seabirds related to puffins), but also introduced rats – this was to be the focus of my 4 years of work.

Kiska is large (over 270 sq. km), volcanic, and isolated. A large lava dome also formed in the late 1960s also meant jagged lava rocks that would tear your boots and pants to pieces if you weren’t careful.  We did 11-weeks on Kiska each year, with no resupply, and mostly canned/dried food, relying on rainwater as any natural source was tainted by volcanic emissions.  After my first “big” hike in 2007, through what would become a regular route, I literally asked myself what I had gotten myself into. 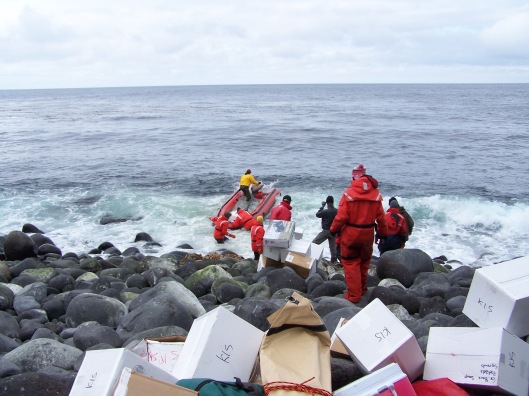 Landing “beach” at Kiska. Not for the faint of heart. 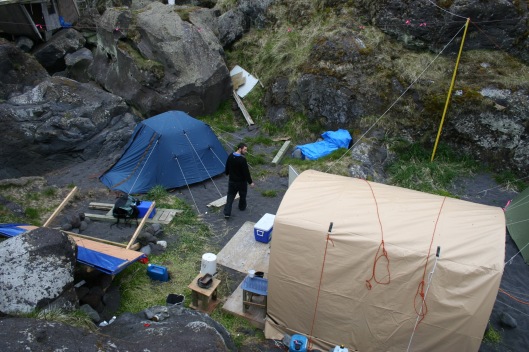 Our wee camp. Tents and a weatherport.

The 1960s lava dome in the distance; photo taken from about 1800′ up the volcano 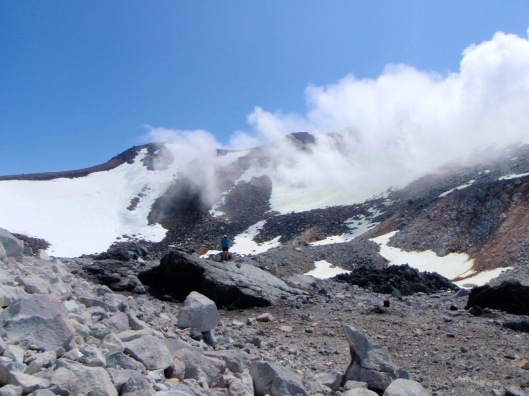 The summit of Kiska Volcano – 4004′ above sea level

Kiska is a place of immense beauty, and the work we did there had not been done before.  We, quite literally, were going to places on that island that no one had ever been to before.  Stepping where no one had stood before. That’s pretty powerful.

Despite there significant differences, these two islands (and my experiences there) share many characteristics.  First and foremost, I visited them with friends, and that shared experience, through hardship, success, and completing the task before us made our friendships stronger.  Second, and relating to Sarah’s post, they were remote and isolated. No phones (cellular or otherwise) aside from the sat phone (at $1.50/minute), no internet, no television, no distractions.  Complete and total immersion (sometimes literally), for better or worse.  I have spent considerable portions of my life in the absence of anthropogenic noise. Now living in England (where you can be no farther than 3 miles/5 km from a road at any time), I am inundated with noise.

But not for long. These days, I venture to the most remote inhabited island in the world, Tristan da Cunha, and spend 3 weeks in joyful natural bliss (and hardship) on Gough Island. The stark differences between my current and future locations make each more intense, which can be both good and bad.

Postscript – there’s a pervading sense of machismo around field work that I’m certainly not advocating. Field work is tough, hard work, but so is lab work, modelling, writing, administrating, … tough work, not matter the context, can be just as rewarding.